Whale watching in Cape Town: all you need to know! 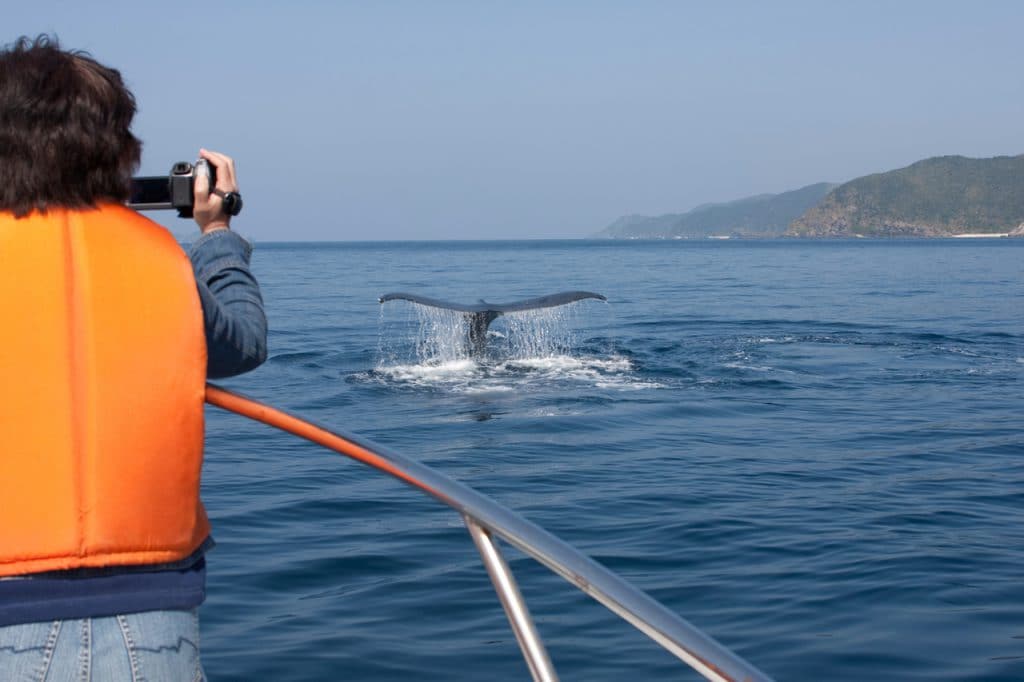 South Africa may be known for its Big Five, but the marine wildlife is just as impressive! Every year, southern right whales take a vacation in Cape waters, treating Cape Town locals to a display of breaching, fluking, spouting, and spyhopping. Here’s what you need to know about whale watching in Cape Town.

Get hold of a City Pass to enjoy free entry to over 70 Cape Town attractions, including whale watching!

What you can expect to see

Of the whale species seen in the waters around the Cape, southern right whales are the most common. However, you might also get a chance to see humpback whales and Bryde’s whales.

Long before they became a protected species in 1935, southern right whales were considered the ‘right whales’ to hunt because of their slow swimming speeds and the fact that their carcasses float. These days, their population has grown again, and they’re fairly common to spot off the coast of Cape Town. Southern right whales can be distinguished by the callosities (rough patches of skin covered in barnacles) on their heads as well as their long arching mouths and characteristic double blowhole. They average 15m in length and can weigh a whopping 60 tons! The whales migrate annually from Antarctica to the coast around Cape Town to calve their offspring. They usually arrive in June and stay until November.

Humpback whales, with their obvious humps, knobbly heads, and long pectoral fins, can also be seen in Cape waters during their migration from the polar regions to Mozambique and Madagascar where they breed and give birth. You are most likely to catch a glimpse of them between May and November. They’re also a friendly species, and can sometimes be seen interacting with southern right whales and bottlenose dolphins.

Although they are the only species of whale that is present in South African waters all year round, Bryde’s whales can be tricky to spot because they tend to dive for long periods of time before resurfacing only briefly. You are most likely to spot these shy whales between the West Coast and Port Elizabeth. Look out for a large, sleek, dark grey body with white on the underside, and three ridges near the blowhole. 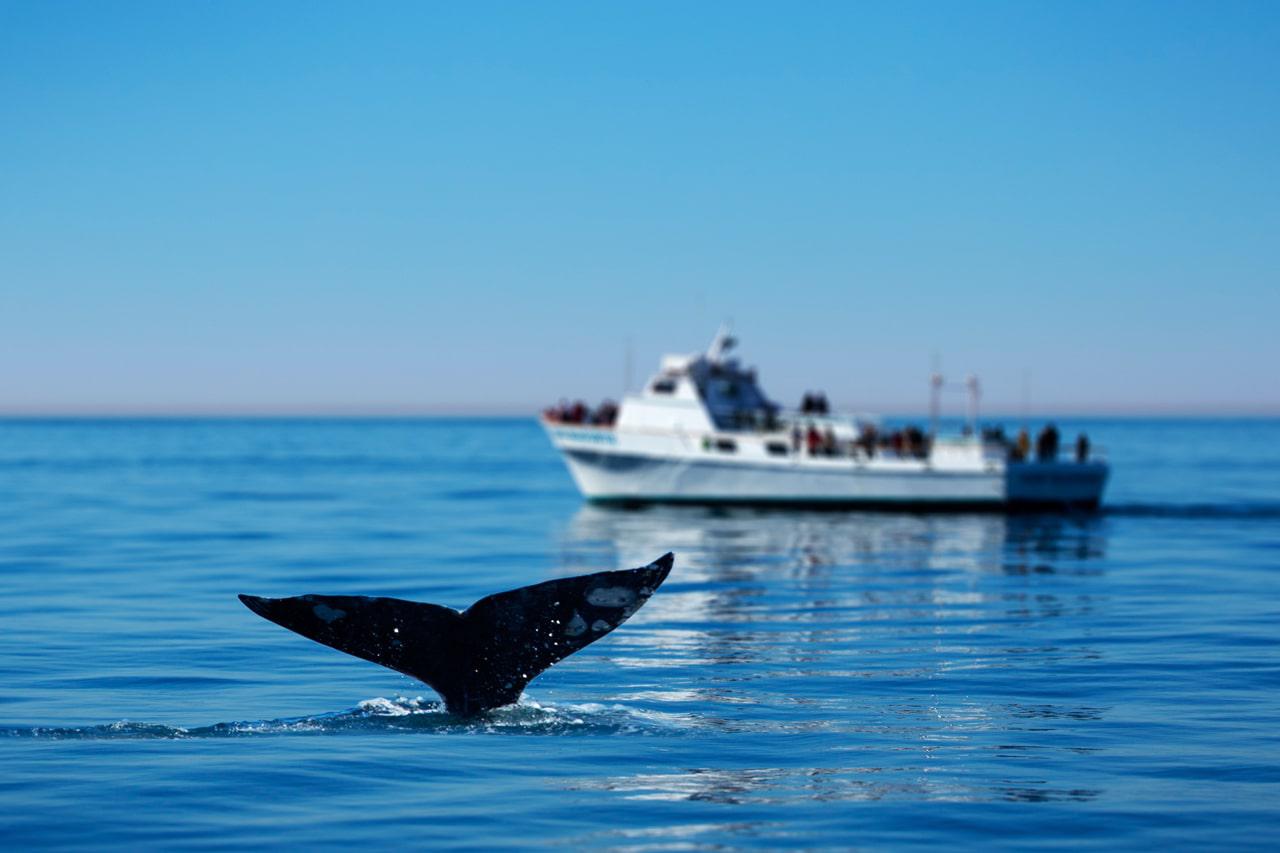 Best places to watch the whales

False Bay is the best place close to town for whale watching. Opt for the higher vantage points along the False Bay coastline such as Cape Point, Boyes Drive between St James and Kalk Bay, and Clarence Drive between Gordon’s Bay and Rooi Els. During the whale-watching season, you might even be lucky enough to spot them close up if you take the train trip from Muizenberg to Simon’s Town.

Hermanus is rated as one of the top 12 whale-watching locations in the world by the World Wildlife Fund. It offers some fine land-based viewing opportunities because the whales often come within metres of the shoreline. There are viewing terraces at the Old Harbour, and Gearings Point is a popular spot. During the whale watching season, a Whale Crier alerts watchers to the presence of whales by blowing on a kelp horn. To fully immerse yourself in the whale experience, visit Hermanus during the first week of October when the seaside town hosts an annual whale festival—a celebration of all things cetacean.

The West Coast is a beautiful stretch of coastline that offers plenty of opportunities to spot whales. There are numerous small, coastal towns along this stretch that are havens of fishing, hiking and adventure sports. During the spring flower season, they are also covered in carpets of Namaqualand wildflowers that are an attraction in their own right. Try Langebaan, Paternoster, Lambert’s Bay or Yzerfontein for a unique whale-watching experience away from the crowds.

Gansbaai is known for its sharks and is one of the best places in the Cape to try shark-cage diving, but it’s also a popular spot for whale watching.

Cape Agulhus is another popular whale-watching area. Up to 50 pairs of southern right cows and calves have been known to frolic in the ocean near the southernmost tip of Africa. The Whale Trail, a five-day hike along the cliffs, dunes, and beaches, gives you a wonderful opportunity to view these mighty mammals and their offspring. 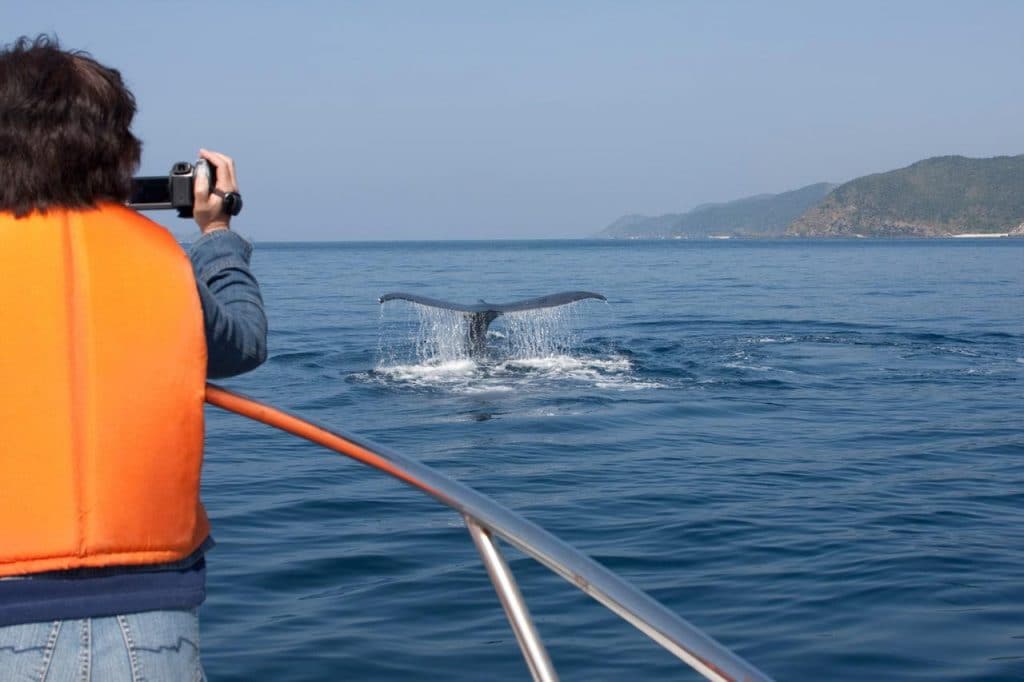 Getting up close and personal

While the Cape coastline offers many fantastic land-based viewing opportunities, it is an entirely different experience to get close to these magnificent creatures in the ocean.

Dyer Island Cruises depart from Kleinbaai harbour near Gaansbaai, and head to Dyer Island (8km from the shore). During the two-hour trip, you will see a variety of bird species, including African penguins, as well as Cape fur seals. The guides know where all the best whale-viewing spots are and have even reported seeing the same whales year after year! The peak season is from July to December, and southern right whales are pretty much guaranteed between August and November.

Simon’s Town Boat Company is your best bet if you’re a little more pressed for time and need to keep things local. The whale tours are operated by Ocean View Masiphumelele Fishing and depart daily from Simon’s Town at 10:30am and 2pm. Booking is advised.