GREATEST LOVE OF ALL SHOW A tribute to Whitney Houston 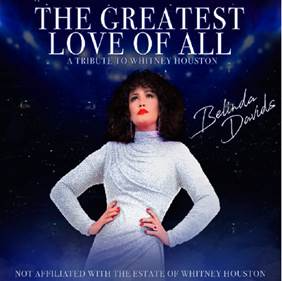 Be part of ‘The Greatest Love of All’ show starring talented singer Belinda Davids who returns to South Africa for the first time in three years, with a show-stopping tribute to Whitney Houston on Saturday, 3 December, at the Grand Arena, GrandWest.

The greatest love of all show brings to life the musical legacy of music icon Whitney Houston in a two-hour concert featuring her greatest hits such as ‘I will always love you’, ‘I wanna dance with somebody’, ‘I’m every woman’, ‘I have nothing’ and many more.

David’s vocal range comfortably enables her to reach even the highest of Houston’s notes. She has performed alongside internationally acclaimed Grammy Award winning artists such as Keri Hilson, Monica and Keyshia Cole, and she has appeared on Britain’s Got Talent in 2020 as well as FOX TVs ‘Showtime at the Apollo’.

South Africa forms part of an international tour that will also take in the USA, the UK, Europe, Middle East, Singapore, Australia and New Zealand.

The show begins at 8pm. Tickets start from R290 and can be purchased at itickets