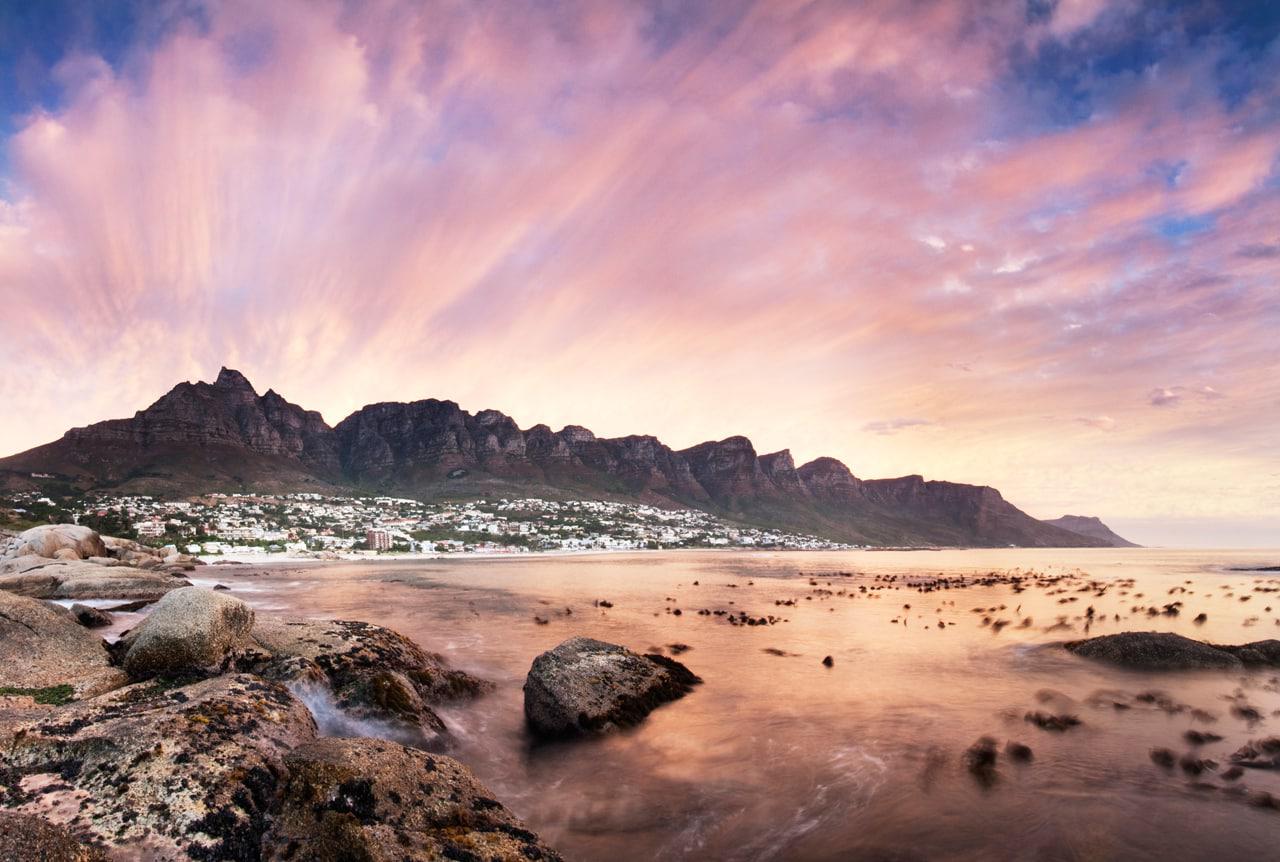 The Twelve Apostles Mountain Range forms the back of Table Mountain, where you’ll find one of the most scenic stretches of coast in the world. It runs roughly from Kloof Nek (the saddle between Table Mountain and Lion’s Head) to Hout Bay. Victoria Road runs along the entire length of the series of mountains, overlooking the Atlantic Ocean on the one side, and the magnificent crags, ridges, ravines, and gorges of the Twelve Apostles on the other.

What’s in a name?

You’d think you’d be able to count 12 peaks, given the name of the series of mountains. You’d be wrong. There are 18 peaks, although it really depends how you count. The theory is that if you count the buttresses only (that’s the part that protrudes, which might be made up a few peaks), there are 12. Not that it matters—you’ll soon be distracted enough by the scenery to forget all about pedantry.

Each peak, however, has its own name: from north to south, they are Kloof, Fountain, Porcupine, Jubilee, Barrier, Valken, Kasteel, Postern, Wood, Spring, Slangolie, Corridor, Separation, Victoria, Grove, Llandudno Peak, Llandudno Corridor, and Hout Bay Corner. If you want to truly wow the locals with your detailed knowledge of the local mountains (and Capetonians love their mountains), try to learn a few of those.

The views here really speak for themselves. Miles of uninhabited scenery, alongside the Atlantic Ocean. Along the way are stunning beaches, magnificent granite rock formations, and the towering crests of the mountains.

Take a drive along Victoria Road while you’re in town, or opt for a ride on the City Sightseeing bus. It will take a minimum of 30 minutes, but if you have your own car it’s well worth stopping off at one of the amazing beaches along the way. The road hugs the Twelve Apostles, passing quiet stretches of the coast as well as bustling cosmopolitan beaches. In this part of Cape Town, the sun sets over the sea, so it’s a fantastic place to drive just before sunset. Stop in Camps Bay for a delicious cocktail and snack while the sun goes down.

The Twelve Apostles are not as high as Table Mountain, but they are arguably more interesting. The deep ravines, towering cliff faces, ridges, and gorges are simply breathtaking, and they make for some of the best hikes in the city. We recommend the Tranquility Cracks hike. It starts about halfway along the Twelve Apostles Range. The cracks are up to 5 metres deep, and are really beautiful to explore. The best way to is via the Pipe Track and Corridor Ravine. Make sure you follow our hiking safety tips, and always hike with someone who knows what they’re doing!