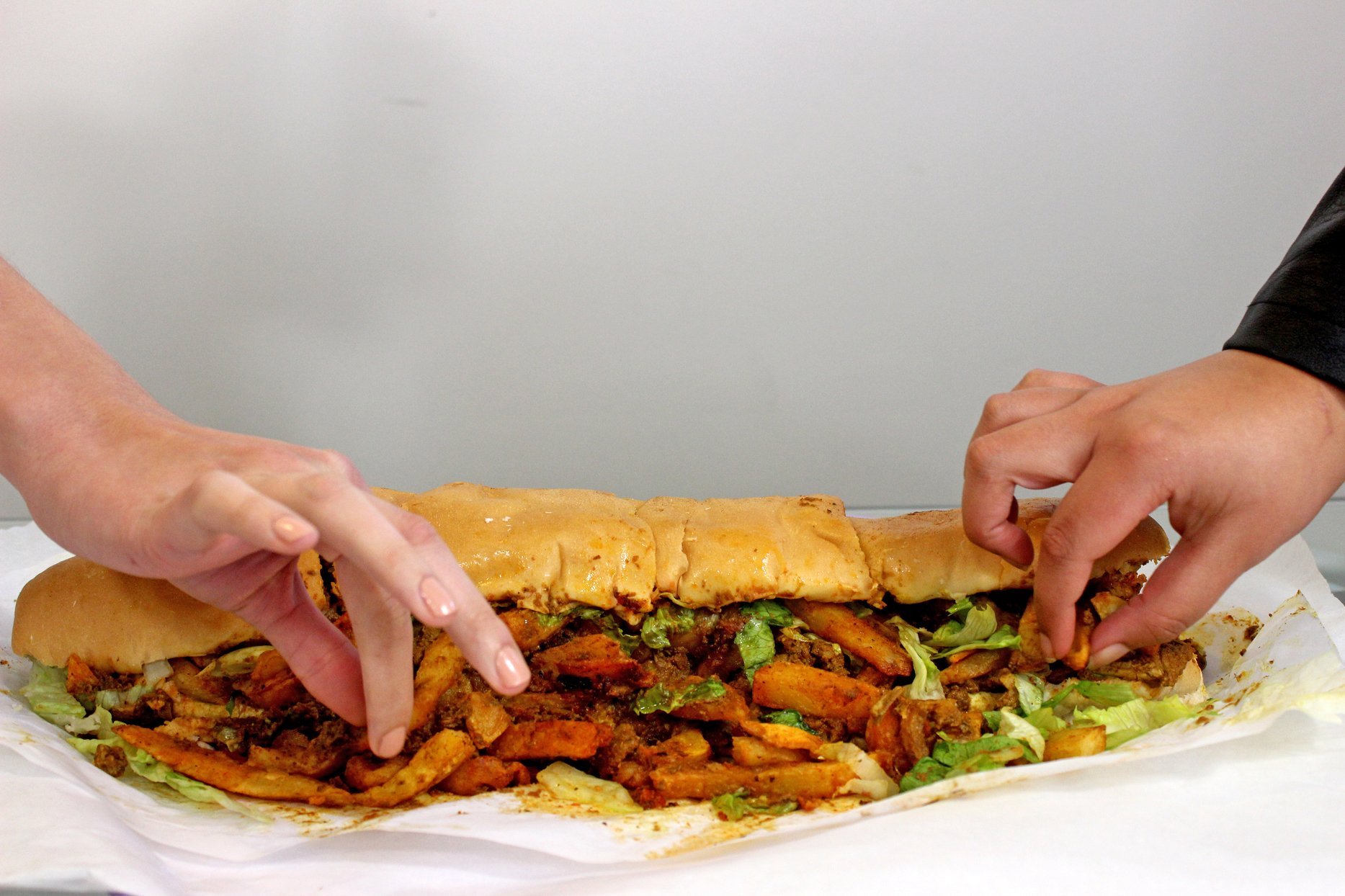 “You have to taste a culture to understand it,” travel writer Deborah Cater once said. We couldn’t agree more. South Africa is a country with a rich cultural heritage and food plays a big role in all cultures.

Home to many cultures, with lots of different cuisines and dishes, the one common element around South African tables is that we’re big on sharing. Meals are mostly served family-style at home, and potlucks are common at large family gatherings.

Journey with us as we explore some of South Africa’s most iconic foods.

In Cape Town, Cape Malay cuisine reigns supreme. It all started in 1652 when the Dutch arrived in the Cape to establish a port for their vessels to stop at on their way to the East Indies. The Dutch needed labourers for the growing port and began bringing in slaves from Indonesia, as well as parts of Africa. These slaves were the first to bring Islam to the Cape and included political dissidents opposed to the Dutch presence in Southeast Asia.

From tragic beginnings, Cape Malay has emerged as a strong culture of its own distinct from the Asian, African, and Dutch cultures that have influenced it.

Food is an incredibly important part of Cape Malay culture. There are many foods that make up Cape Malay cuisine, including bredies (stews), curries, pickles (atchars and sambals), savoury snacks and sweet treats such as boeber, koesisters and a variety of “porrings” (the Cape Malay take on warm puddings). Cape Malay celebrations such as Eid, weddings, engagements, births are feasts of sharing where enough food is made to fill all the bellies present and then still share a “barakat” with guests to take home. The barakat is a plate made up of cakes and snacks that couldn’t be consumed at the event and is given as a thank you to guests for attending.

Let’s take a look at some Cape Malay dishes.

The Cape Malay koesister is flavoured with cinnamon, cardamom, mixed spice and aniseed. Every koesister-maker has their own combination of spices so no two people’s koesisters are alike. After deep-frying they’re cooled down, dipped in a hot sugar syrup, and then rolled in coconut.

World Koesister Day is marked on the first Sunday in September.

Koesisters and coffee can be found on many breakfast tables on Sunday mornings in Cape Town. “I remember many a Sunday morning, getting up early to go and buy koesisters in Schotcheskloof, Bo-Kaap. There I was, along with so many other boys and girls, walking with our empty bowls that would soon be filled with the most deliciously warm and fragrant koesisters,” writes Cariema Isaacs in Cooking For My Father in My Cape Malay Kitchen. 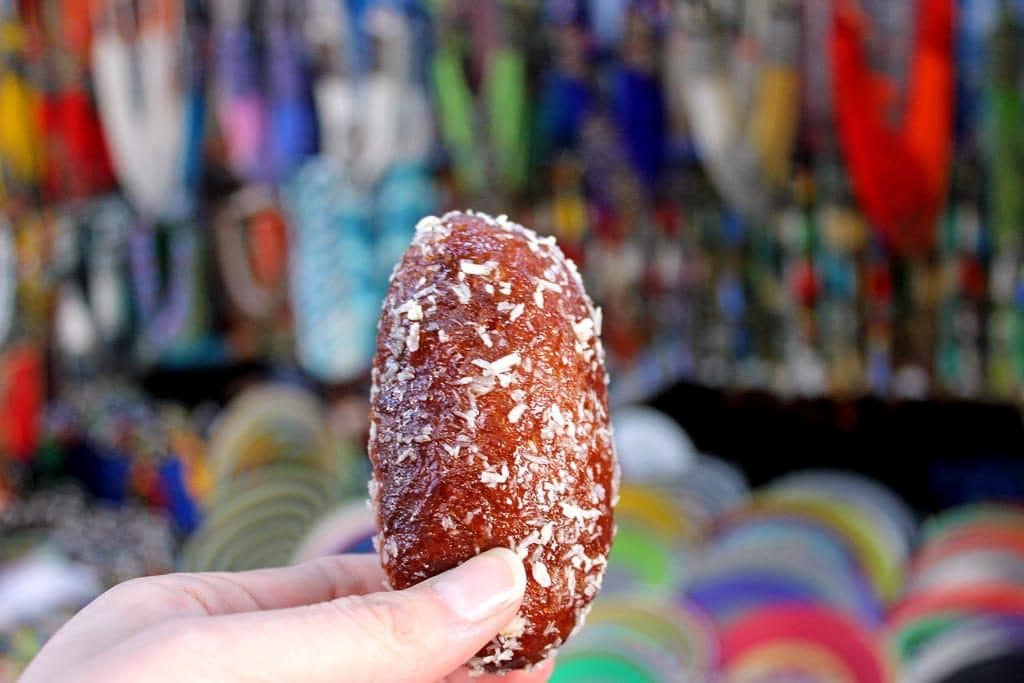 The hertzoggie is a traditional biscuit filled with jam and coconut and its origin is fascinating. Named after JBM Hertzog, a who was a South African Prime Minister from 1924-1939. According to food writer and historian Cass Abrahams, Hertzog had made two promises: To give women the vote and to make Malays equal to whites. Excited at the prospect of equality, Malays baked a shortcrust pastry filled with apple jelly and topped with egg white and coconut and called it a Hertzoggie in Hertzog’s honour. However, when he only fulfilled one promise (giving women the vote), the Malays took this same Hertzoggie, topped it with pink and brown icing and named it a twee gevreetjie (hypocrite).

A bredie is a stew consisting of meat and vegetables. What sets a Cape Malay bredie apart from other stews is the way the meat is braised along with the addition of either a chilli or chilli flakes, says Cariema Isaacs in her cookbook. It is slow-cooked and the flavours develop together as they’re cooking. The most popular bredies are tomato bredie, cauliflower bredie, and even beans bredie. It’s commonly served with pickled vegetables or atchars.

Have you heard of a Seven Colours meal? It’s a term used to describe a Sunday meal in many black South African homes and it’s the meal you look forward after a long Sunday church service, says Nolu Dube-Cele, head chef and owner of Seven Colours Eatery.

She tells us that a Sunday feast commonly consists of yellow rice, meat and chicken, colourful salads and all the different kinds of vegetables, especially beetroot.

A Seven Colours meal is soul food that’s shared and made with love, explains Dube-Cele. Seven Colours inspires celebration menus so it’s not surprising to find it on the table at birthdays, weddings and anniversaries.

“When I started my business, I got inspired by this mealtime. I wanted to create something that represents an authentic South African food culture and would bring different people together. My interpretation of this mealtime has everything to do with the traditional food that I grew up eating. I bring interesting twists and variations to traditional dishes. For example, making turmeric umngqusho instead of rice, incorporating traditional vegetables like utyutu. When you look at the Seven Colour plate, it has different elements but somehow, they come together,” says Dube-Cele.

Indian food is one of the most popular foods in South Africa, says Seelan Sundoo, owner of Sundoo, a South Indian tapas restaurant in Sea Point.

However, Indian food in South Africa differs from what you’d find in India. Durban-style Indian cooking is unique and you won’t find it elsewhere in the world, says Sundoo. Durban-style Indian cuisine grew in South Africa because of the indentured labourers who came from India to work here on sugar plantations, railways and farms. They didn’t have a lot of spices so they had to improvise with what they could find in SA, explains Sundoo.

There are many dishes that make up South African Indian cuisine, such as crab curry, tamarind fish curry and salomies – a curry-filled roti wrap sold by many take-outs, but the one dish that has global recognition has to be the Bunny Chow.

The Bunny Chow is a hollowed-out loaf of bread filled with curry and has been around since the 1940s or ’50s. There are many different stories about its origins. Sundoo’s parents told him it came from a popular Indian restaurant. During apartheid, restaurants weren’t allowed to serve indentured labourers inside the premises so they would serve them out back. The bread was hollowed out to serve as a vessel to hold the curry. This was wrapped in newspaper and shared among the labourers.

The name derives from the Banias – an Indian caste which started restaurants in Durban. True connoisseurs of the Bunny Chow don’t call it by its full name though. Durbanites would simply request a Bunny or order a quarter/half a mutton/veg/chicken and the eatery would immediately understand what they want.

To get a taste of an authentic Durban Bunny Chow in Cape Town, head to Sundoo restaurant. Sundoo says many people from Durban come there to get their “Bunny fix” when visiting Cape Town. 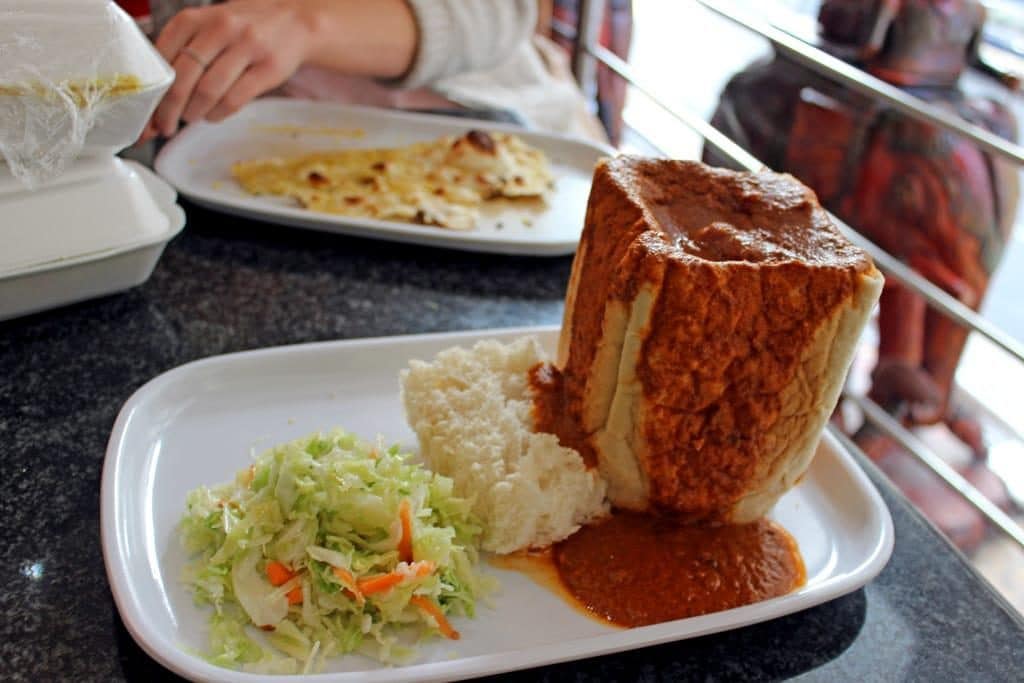 A gatsby is a long sandwich filled with a number of ingredients, usually including several kinds of meat and hot chips. The Masala Steak Gatsby is a favourite: lettuce topped with spicy tender, juicy steak and chips, doused with sauces. One Gatsby can feed at least four hungry people, so it’s made for sharing.

Rashaad Pandy, owner of Super Fisheries in Athlone, says he invented the sandwich by accident one night in 1976.

This iconic sandwich may have started out in Athlone, but it’s found at many fast food restaurants in Cape Town. While the Gatsby is made for sharing, there are rules to its consumption which Gatsby consumers take very seriously. For example, “any chip falling from any given piece of the Gatsby is considered fair game.” Read the other rules here: Gatsby Etiquette.

Braai, a much loved South African pass time, literally translates to barbeque but has its own set of social norms. It’s not unusual that men are the ones cooking the meat on the braai, while women prepare salads and sides, according to www.braai.co.za. Braais usually happen during summer, though it’s not uncommon to drive through a suburb on a warm winter’s day and smell the unmistakable meat on the coals wafting through the air.

Shisanyama is similar to a braai or barbeque, but has its roots in South Africa’s townships. Shisanyama is a Zulu word, literally meaning “burn meat”, which refers to the way the meat is cooked over hot coals. It started off as a way for butchers to drive sales over the weekends, and today it’s one of South Africa’s most delicious and social ways of eating. Read more about shisanyama here. 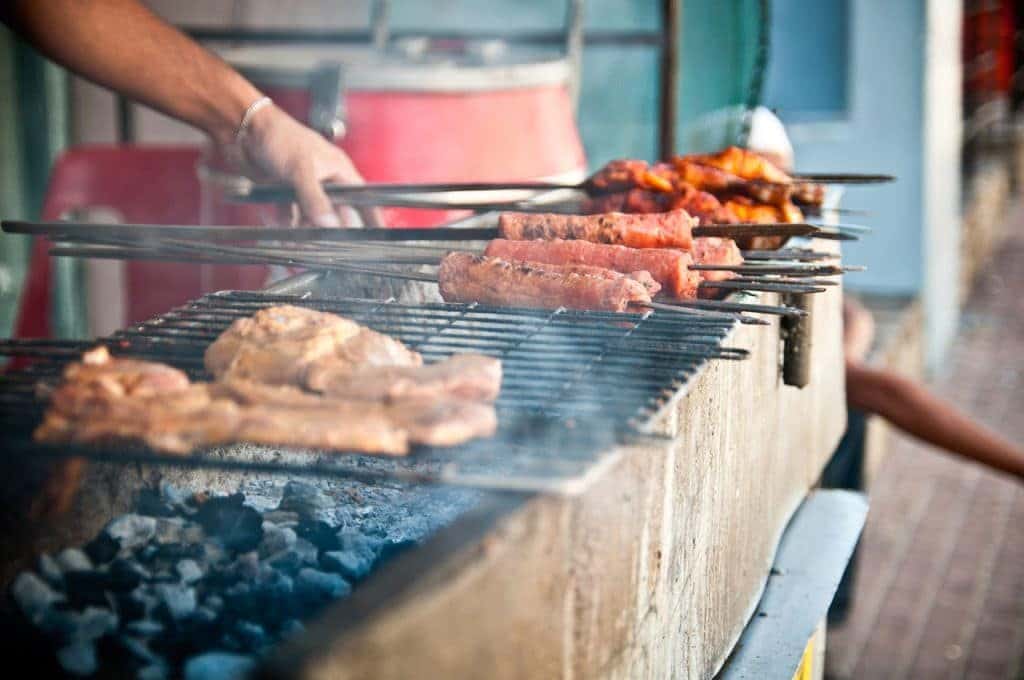