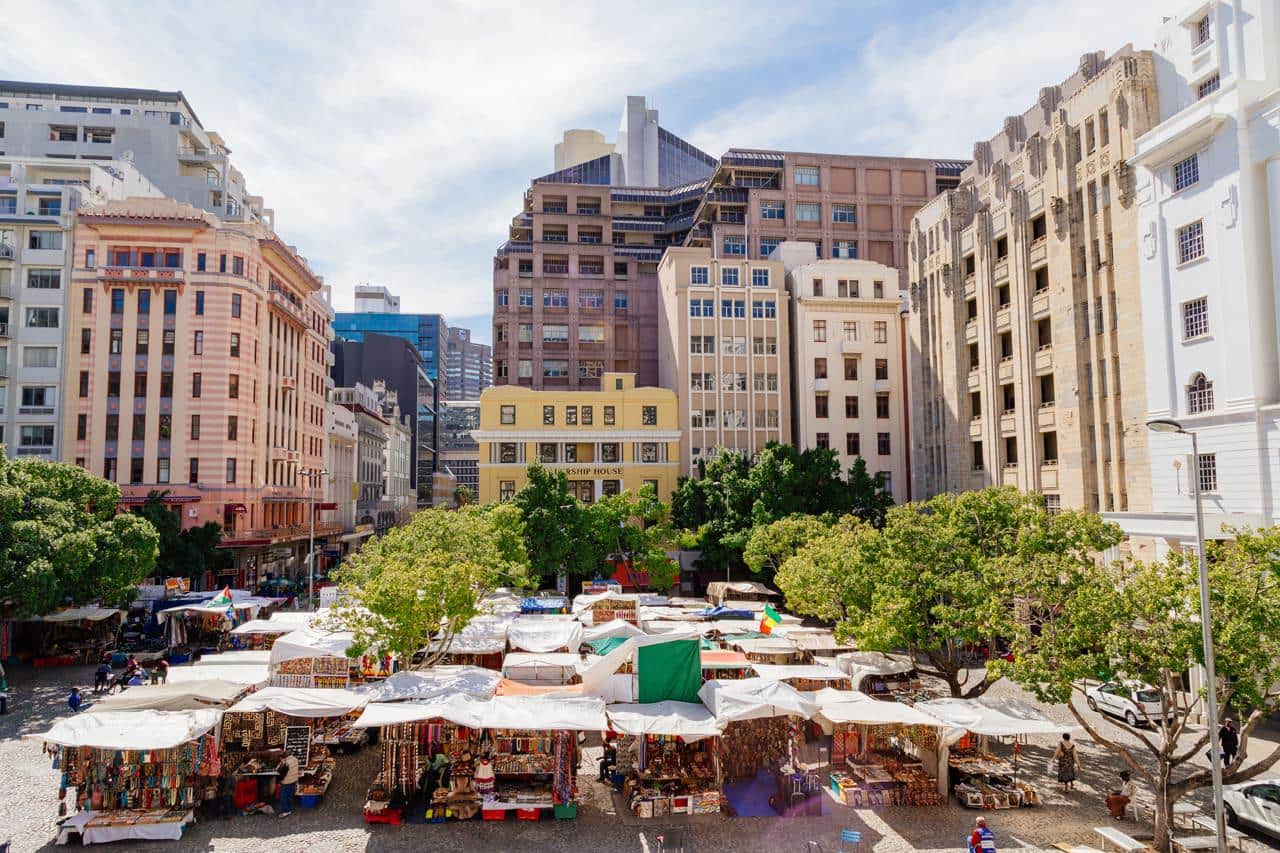 Every morning, traders lug carts loaded with wares to the square to set up, and by the the time the rest of the city awakes the cobbled square is a bustling market filled with curios, food, buskers, jewellery, clothing, and nick-nacks. This is one of the best places in Cape Town to buy curios and gifts for your loved ones back home, while supporting the entrepreneurial traders. There are stunning canvas artworks on sale, along with leather goods like sandals, hand-crafted jewellery, ornaments, and much more. You could spend hours weaving between the colourful stalls, meeting some eccentric local characters and finding treasures to take home with you. Remember that while bargaining is a big part of the informal economy, the traders make their living on these sales so always pay a fair price and don’t haggle just for the sake of it.

Greenmarket Square was first established in 1696, in the first century of Dutch occupation of the Cape colony. Since the days of its inception it has served many a purpose, some more admirable than others. It was first used as a market square where fresh vegetables grown at the nearby Company’s Garden were sold, along with slaves. A well was also built here, where citizens could fetch water during the dry summer months when the streams off Table Mountain ran dry.

In 1716, the Burger Watch House was erected on the square, which was the headquarters of the Cape Colony’s citizen patrols. Men between 16 and 60 were required to work shifts here, patrolling the city and keeping an eye out for fires. This building later became the Old Town House, and still stands on the square today. It’s an impressive building, with pillars, and a crest over the upper balcony.

By 1845, most of the single-storey buildings you can see in the painting above had been demolished to make way for taller buildings, including the Central Methodist Church and a number of art deco-style buildings. When the Cape Town City Hall was built in 1905 on the Grande Parade, Greenmarket Square entered a slump of obsolensence, which peaked in 1950 when it was converted to a car park. It was only in the late 80s that it started up again as a small flea market.

In 1989 the square rose from he ashes as another important historical moment unfolded here: the Purple Rain protest against apartheid. The March arrived at Greenmarket Square and was met with a police water cannon sparying purple dye to disperse the crowds. A protester leapt onto the cannon and tried to redirect it away from the crowds toward the headquarters of the apartheid government, painting that building as well as the white walls of the Old Town House purple. Over the next few hours, protesters were identified by the purple dye and arrested by the hundreds.

Today, the Old Town House is home to the Michaelis Collection of art, donated by Max Michaelis in 1914. It is a selection of 17th century Netherlandish works, including those by Frans Hals, Jan Steen, Jacob van Ruisdael, Anthony van Dyck and others. There are also temporary exhibitions on display from time to time, which can be found on the Iziko website.

Aside from these historical art collections, you’ll also find artworks on sale at the market, along with a number of contemporary galleries nearby.

There are a number of free concerts that take place on Greenmarket Square, including the annual community concert that forms part of the Cape Town International Jazz Festival. On the first Thursday of every month you’ll also find this is a hub for First Thursdays, with live music performances throughout the evening. But you don’t need to wait for these more formal events to catch Cape Town’s beats. Every day the square hosts buskers and street performers, making it a lively place with a distinctly Southern African feel any day of the week.

There is an overwhelming number of options for grabbing a bite to eat at Greenmarket Square. If you want to get your hands on some traditional Cape Town food, this is a good place to start. Restaurants range from Baran’s Shisha Lounge, where you can enjoy Kurdish fare, belly-dancing, shisha, and coffee, to local vendors selling any number of local delicacies, and even a Burger King. There’s Honeybun, which does delightful cakes and coffee, or Trattoria Bellini, with tables spilling out onto the square where you can get great pizza and watch the action over a cold drink. Within a few blocks’ radius, you’ll find everything from cheap curry to fine dining to chain restaurants. Your only problem will be that you’re spoilt for choice!

The thing most people—visitors and locals alike—love about Greenmarket Square is that it’s just authentically Cape Town. It’s loud, colourful, and at times almost dizzying with activity. Street musicians jostle for space alongside traders, in the shadow of gorgeous old colonial buildings where the history is etched into the very walls.Craftsmen chat loudly in English, Xhosa, Afrikaans, French, and dozens of other languages, while marimbas fill the air with the sounds of South Africa.